Have you ever noticed how the extensive use of a word will minimize the significance of the underlying principle? Could “SIN” be such a word? 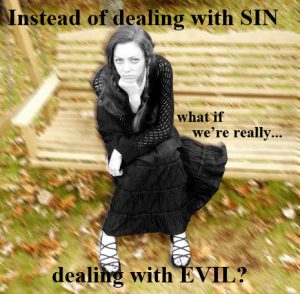 A couple Sundays ago, we had an interesting Bible Study discussing the nature of evil and God’s sovereignty. As the discussion progressed, one of the members sat bolt upright, leaned forward, and said, “I never thought of it like this before…When I say I daily must deal with sin in my life, what I am really saying is that I must deal with evil in my life. That makes it a whole lot more significant. We all have sin in our lives; we say it in church, at home, and in our Bible studies. But, what it really means is that there is evil in my life; and I have a tendency toward EVIL!”

Has our use of the word “SIN” softened its meaning? “SIN” is something we should hate as much as God does. Do we?

What is “expedient” sin, and how often might we overlook it?

“The Southerners” is the fifth segment in The Courage of Your Faith series. In 1696, William Screven moved with less than 30 of his followers from Kittery, Maine, to a plantation they called Somerton (or Summerton) outside of Charles Town in the Province of Carolina. Those folks around Charles Town that had a spiritual mindset dealt with two outstanding issues…prostitution and drunkenness.

Men and women often came to Charles Town as indentured servants with the promise of land after working for a period of time. Women soon found they could reduce the time of service by sleeping with the “master.” After receiving the land, working it was often too difficult for women. As they turned to other professions, they frequently found that working in a brothel could earn in one night what might take 6 months in another occupation. Being one of the largest port cities in the Colonies, Charles Town had a market for such establishments. Even the religious often looked the other way.

Drunkenness was a problem purportedly because of the brackish water. Alcohol covered the bad taste, so it was claimed. While this may have had a positive effect on the water quality, it also resulted in people being “tyed by the Lipps to a pewter engine.” One story says that an Anglican Commissary was so drunk he tried to baptize a bear. (If you take the story link, search on “bear”.