The kids’ Write Your Novel class at the library had 12 students show up…and only one had fluttering eyes by the time it ended. The adult class had 22. In both presentations, everyone had a great time. Attendees learned about structure and plot and how to use structure as like directions to build their story. 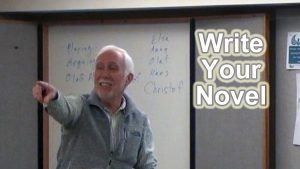 The kids’ Write Your Novel class at the library had 12 students show up…and only one had fluttering eyes by the time it ended. The adult class had 22. In both presentations, everyone had a great time. You can see a video of the class on YouTube. The Publish for Free class will be on April 19.

“The Separates” is the seventh segment in The Courage of Your Faith series. Alamance was a southern battle over taxes fought by mostly Baptist and Quaker farmers against the British supported governor. Unless you are from the south, you probably have not even heard about this battle or about the Regulators. In southern states in 1770, taxation was based on a set fee for land given to the settler. However, the governor could change it. And the tax collectors could extract more for themselves. Furthermore, taxes often had a way of disappearing once collected.

The Battle of Alamance (see pictures of the battlefield here) was fought in 1771 and is commemorated by a number of monuments in the field where, by some accounts, 3700 Regulators confronted Governor Tryon’s militia of 1500 men. The Regulators came to Alamance expecting the Governor to accede to their demands for fair taxation. When that did not happen and weapons were fired, most of the Quakers left; they hadn’t even brought guns. Baptists, on the other hand, came prepared for a hunt; they had guns but not enough rounds to finish a battle. In the end the Regulators lost. Dissatisfied and angry with England, farmers emigrated from the area, seeding the South with resentment toward the British and those that supported them.

See more at “The Courage of Your Faith,” this month featuring “The Separates.”

All documents can be downloaded at no charge from the web site. The short stories have been compiled into one eBook which is downloadable from both Barnes & Noble and Amazon for a small fee.