Our #constitution begins “We the people…” One of its purposes is to “secure the Blessings of Liberty to ourselves and our Posterity.” 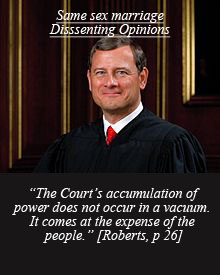 The dissenting opinions in the same sex marriage ruling, stress the danger resulting from activist judges, judges that make decisions based on their own ideas of right and wrong as opposed to Constitutional law. Liberty, rights, and power were all tied up together in our Constitution by its framers. How much of this liberty (the peoples’ power) is being taken from us by judges that interpret law through glasses of their feelings rather than by the Constitution!

Dr. Ben Carson has talked about the possible need to impose #TermLimits on justices. But term limits would bring with it its own danger. A president would still be free to appoint people that think as he/she does and still stack the court, perhaps to a worse degree than happens now. To have the legislative, judicial, and executive branches ALL aligned with one party based on an election would not be a good thing. Term Limits might be a beneficial depending on how they would be implemented.

Really, the problem is a mindset by liberals and conservatives that each of their points of view is the only right point of view. We each want people in power that can make our viewpoint law. Thus we get activist justices, a legislature that won’t compromise, and a growing divide within “The People.”