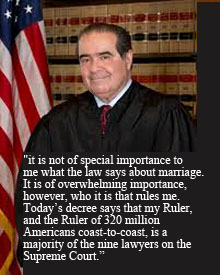 As Matthew 22:21 (“Then render to Caesar the things that are Caesar’s; and to God the things that are God’s.”) implies, we live under a 2-fold order, God’s kingdom and man’s kingdom. As much as we may wish it another way, our President, Congress, and Courts are part of Caesar’s kingdom. Nevertheless, we need to be informed and participative in our governmental processes.

Until recently, the roles of the three branches of our Republic have been clearly defined with Congress representing the people. The ruling by the Supreme Court on same-sex marriage, in the view of Justices Scalia and Roberts has changed that. This is something about which we should ALL be concerned, whether supporters of same-sex marriage or not.

As Justice Roberts states: “…this Court is not a legislature… Under the Constitution, judges have power to say what the law is, not what it should be. The people who ratified the Constitution authorized courts to exercise ‘neither force nor will but merely judgment.’”