In his #dissentingopinion, one of the ways Chief Justice Roberts addresses the Court’s #gaymarriage ruling concerns the issuing of marriage licenses. The Court now requires that States issue marriage licenses to same-sex couples. 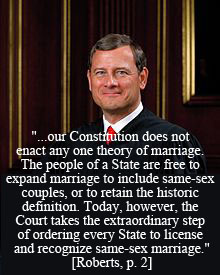 This requirement does not mention churches. However, as long as pastors sign marriage licenses as part of their church’s marriage ceremony, the ruling will involve those churches. So, how can a church avoid the problems related to traditional marriage’s incompatibility with the Court’s ruling? How will the Church separate itself from the government’s decision on the meaning of the license? Does God’s definition of marriage depend upon the government’s definition of the marriage license?