The roads of life–where do they take us? In 1793, slavery was becoming a pillar of southern economic success; many southern farmers chose this road. Gowan Pamphlet, the pastor of the black church of Williamsburg requested admission of his church into the all-white Dover Association of Baptist Churches; he picked a road that looked difficult to travel. Two roads–one of slavery and the other based on the equality of man before God. Neither ultimate destination was clearly seen at the time.

Sandy and I just returned from a trip along the Oregon/Mormon Trail researching the third book in my Fury series. I wanted to travel to stops mentioned in the story. One of these was Red Rock, Iowa. Our GPS took us about nine miles off the main road over narrower and narrower gravel and dirt roads on the way to Red Rock. All the time, I looked forward to arriving at the historic town. Finally, the GPS said we were almost there. Excitement rising, we made a turn…and stopped. Just ahead was a  sign that read DEAD END.

The road to Red Rock. 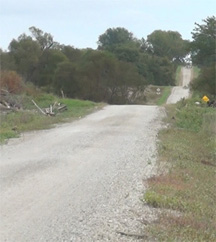 How much like life! I thought. As with many of the southern cotton farmers who thought they were on the right path, all indications were that I was as well…until I saw that the end was really a dead one.

Where were we to go? How would we find Red Rock? A cloud of dust arising from the road back, gave me hope. I flagged down a truck that looked official, like its driver would be able to help. I spent a good 15 minutes talking with a new friend, Cleo. He cleared up the matter. Red Rock dam was built in the 1960’s and covered the town of Red Rock. Contemporary pictures of Red Rock, Iowa, would be the peaceful surface of Red Rock Reservoir.

Again, I thought, How much like life! There IS someone who knows the paths we travel—which ones lead to death and which to life.